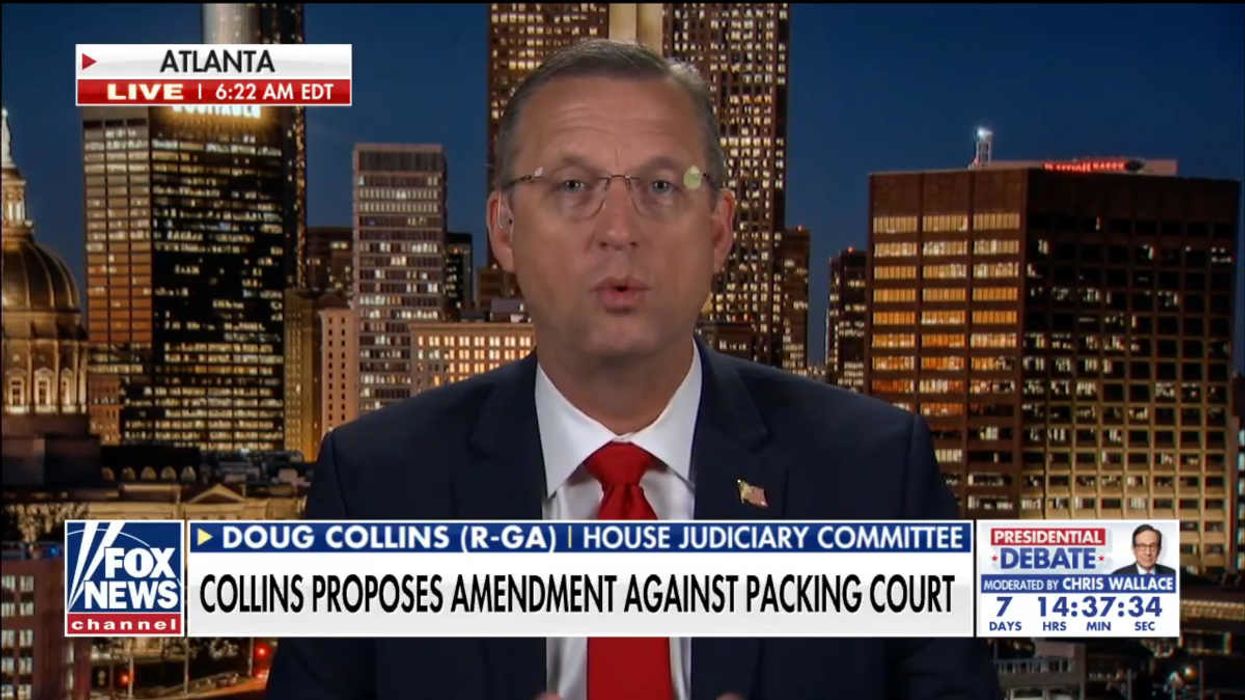 A Republican congressman running for U.S. Senate in Georgia says he has a proposal that will end the political war that erupted after Supreme Court Justice Ruth Bader Ginsburg died Friday.

Rep. Doug Collins (R-Ga.) plans to introduce a constitutional amendment that he says will “take the heat of the moment out of” Supreme Court nomination fights as Democrats threaten to pack the court should President Donald Trump and the Senate GOP majority move forward with a new Supreme Court nominee before the inauguration of the next president.

“Any time the Democrats don’t get their way, they want to change the rules,” Collins, the ranking member on the House Judiciary Committee, said on “Fox & Friends” Tuesday.

“So what we’re gonna say is this, if you want to pack the court, like Jerry Nadler, the chairman of the Judiciary Committee, said and others have said, then we want to put in a constitutional amendment that says let’s take the heat of the moment out of this.”

Collins’ proposed amendment would prohibit legislation designed to change the size of the court from taking effect until 10 years after such legislation is passed by Congress and signed by the president.

On Saturday, the day after Ginsburg’s death was reported, House Judiciary Chairman Rep. Jerry Nadler (D-N.J.) publicly called for the next Senate to “immediately” expand the Supreme Court if Trump’s next nominee is confirmed before the election.

Filling the SCOTUS vacancy during a lame duck session, after the American people have voted for new leadership, is… https://t.co/5McZBwsnFu

Nadler is one of several Democrats who have renewed threats to pack the court if they win the election.

Collins believes that like “sham impeachment,” this is another case of “any time the Democrats don’t get their way, they want to change the rules.”

He feels that that a 10-year waiting period for expanding the Supreme Court will temper the passions of both parties that threaten to do it.

“That way, if you’re really serious about this, if you have a reason to expand this court beyond your momentary temper tantrum, then we actually will have something that you can go ahead with it, but it takes place ten years after the heat of the moment that we’re in,” Collins explained.

Any proposal to amend the Constitution faces the extraordinarily high bar of a two-thirds vote of both house of Congress and ratification by three-fourths of the states.

President Trump and Senate Republicans have been clear that a nominee will be announced this weekend and the confirmation process will begin shortly after.

The president on Tuesday said he will make his nomination on Saturday.

I will be announcing my Supreme Court Nominee on Saturday, at the White House! Exact time TBA.

Senate Majority Leader Mitch McConnell (R-Ky.), took to the floor of the Senate Monday to reiterate that Trump’s nominee “will receive a vote on the floor of the Senate.” Senate Judiciary Committee Chairman Lindsey Graham (R-S.C.) on Monday sent a letter to the Democrats on his committee declaring his intention to hold confirmation hearings for the president’s nominee.