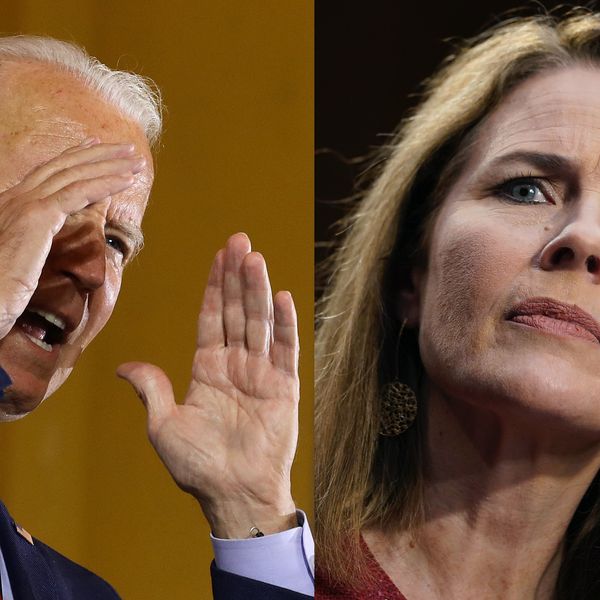 Democratic presidential nominee Joe Biden said that the nomination process of Amy Coney Barrett for the Supreme Court is unconstitutional, but even the CNN fact checker had to admit he was lying.

Biden was trying to deflect from the accusations that Democrats were in favor of packing the court with liberal justices after the election when he made the comments.

“The only court packing going on right now, is going on with Republicans packing the court now,” Biden said to reporters on Saturday. “It is not constitutional what they are doing. We should be focused on what’s happening right now.”

Democrats have criticized the haste with which Republicans have rushed to nominate and confirm Barrett before the election in light of some Republican comments before the 2016 election regarding the confirmation of former Obama nominee Merrick Garland.

CNN’s fact check crushed the claim from Biden and it didn’t take a lot of explanation to do so.

“This is false. Legal experts say there is nothing strictly unconstitutional about Barrett’s confirmation process,” explained Tara Subramaniam of CNN.

The fact check sought a clarification from the Biden campaign, which admitted that the nomination process was not strictly against the Constitution, but that it was against the spirit and intent of the founding document.

“I have no idea what VP Biden meant,” responded Josh Blackman, a South Texas College of Law professor and constitutional expert.

Biden has been on the ropes on the issue of whether Democrats would pack the Supreme Court with extra members in order to fulfill their political agenda.

The former vice president has refused to answer whether he would support such an effort if he won the presidency, and at one point he even said that the voters didn’t deserve to know what his position was on the matter.

“You will know my opinion on court-packing when the election is over,” said Biden.

Here’s more about Biden and court-packing:


Biden opposed court packing in 2019. Now he won’t say where he stands.