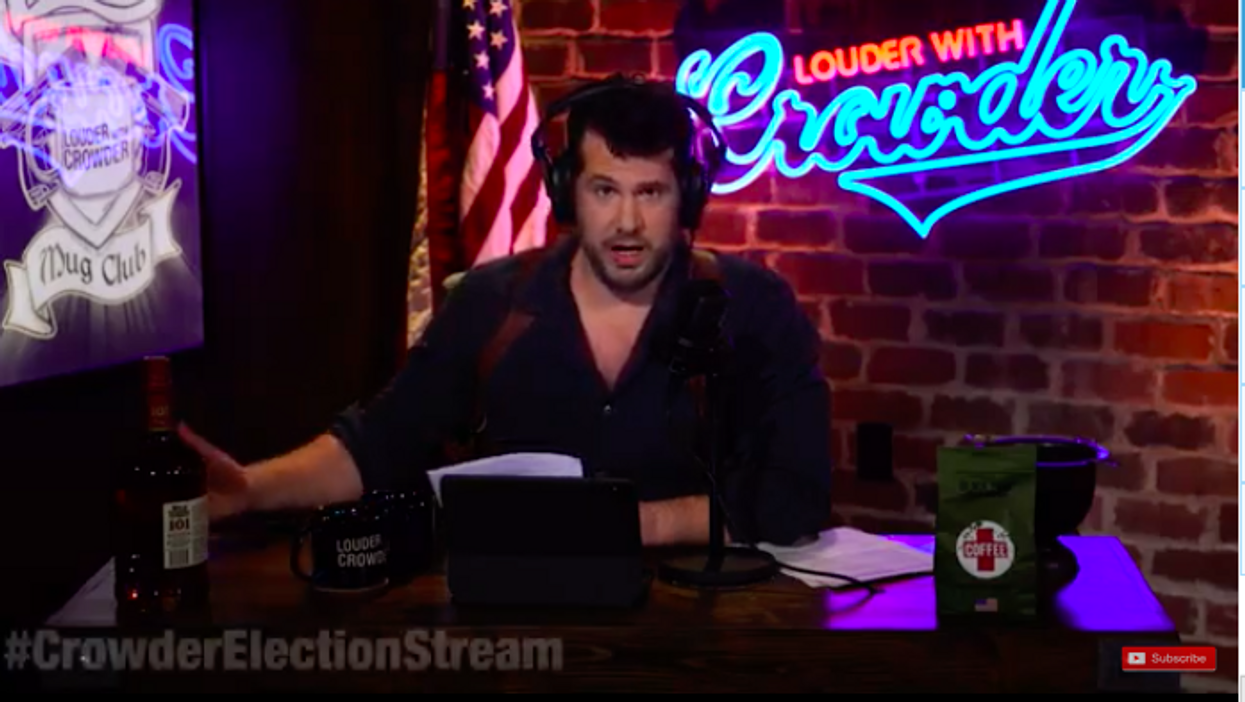 Steven and the LwC team bring you live coverage of election night 2020 with a star-studded cast of guests.

Steven and the LwC team bring you live coverage of election night 2020 with a star-studded cast of guests. 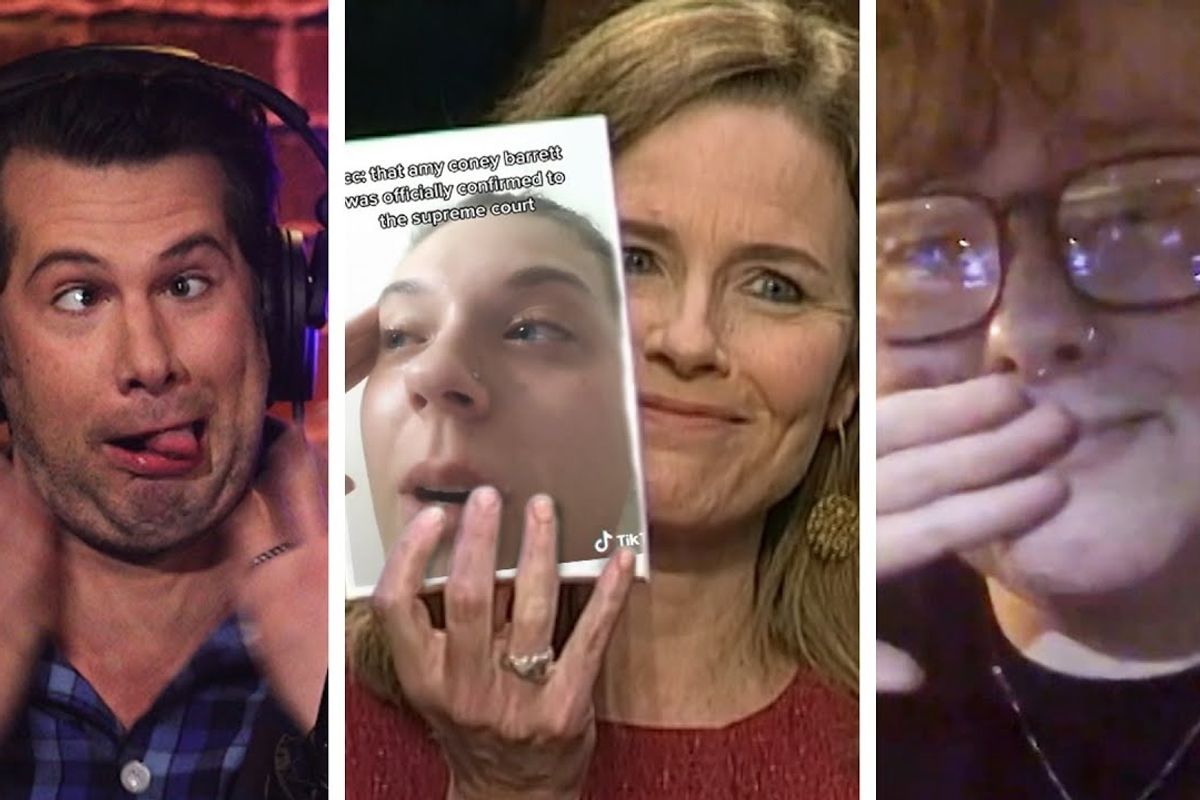 On Monday, the Senate officially confirmed Judge Amy Coney Barrett to the Supreme Court of the United States.

In this clip, Steven Crowder and the “Louder with Crowder” crew discussed Barrett’s Senate confirmation and the meltdowns shared across social media following her confirmation. Later, Crowder delved into the modern-day feminist mentality that seemed to abhor strong, successful conservative women like Barrett regardless of sex/gender/pronoun.

Watch the clip for details. 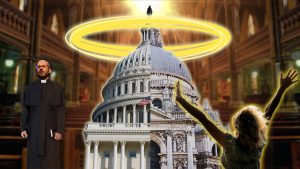 The very Reverend Statist Jim Corbett leads the Church of the Holy State (Acapulco congregation) in a Worship Service. In today’s sermon, he exposes the greatest heresy of all: Statheism. 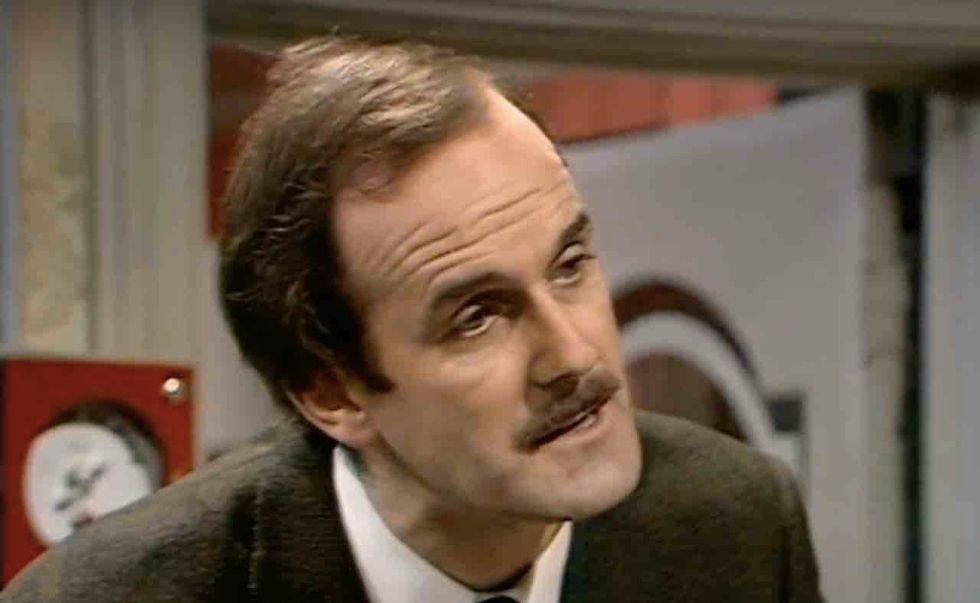 British comic legend John Cleese of Monty Python fame blasted the “cowardly and gutless and contemptible” decision to remove an episode of “Fawlty Towers” — a sitcom he wrote and starred in — from a BBC-owned streaming platform because of racial slurs, BBC News reported.

In the 1975 episode titled, “The Germans,” Cleese’s Basil Fawlty interacts with an older character named the Major, who uses the N-word and slur for the people of India — the latter of which is technically an ethnic slur. In another scene, Cleese’s character uses a slur for Germans.

Cleese reacted to the censorship news as only Cleese can.

“I would have hoped that someone at the BBC would understand that there are two ways of making fun of human behavior,” he tweeted Friday. “One is to attack it directly. The other is to have someone who is patently a figure of fun, speak up on behalf of that behavior.”

Cleese then compared episode to the M.O. of another British sitcom character Alf Garnett of “‘Til Death do Us Part” who inspired the creation of Archie Bunker and “All in the Family.”

“We laughed at Alf’s reactionary views. Thus we discredited them, by laughing at him,” Cleese added. “Of course, there were people — very stupid people — who said, ‘Thank God someone is saying these things at last.’ We laughed at these people, too.”

He then said such individuals are making comedy decisions at the BBC.

“But it’s not just stupidity,” Cleese continued. “The BBC is now run by a mixture of marketing people and petty bureaucrats. It used to have a large sprinkling of people who’d actually made programs. Not any more. So BBC decisions are made by persons whose main concern is not losing their jobs. That’s why they’re so cowardly and gutless and contemptible. I rest my case.”

What did the streaming service have to say?

“UKTV has temporarily removed an episode of Fawlty Towers The Germans from Gold’s Box Set,” a spokesman for the streaming service told BBC News. “The episode contains racial slurs so we are taking the episode down while we review it. We regularly review older content to ensure it meets audience expectations and are particularly aware of the impact of outdated language. Some shows carry warnings and others are edited. We want to take time to consider our options for this episode.”

Cleese does not pander to the outrage mob

Cleese is not one to entertain the demands of the politically correct. Four years ago, he warned that pandering to such people will lead us into an Orwellian society.

“All humor is critical. If we start saying, ‘Oh, we mustn’t criticize or offend them,’ then humor is gone, and with humor goes a sense of proportion — and then, as far as I’m concerned, you’re living in ‘1984,’” Cleese said, referencing George Orwell’s classic dystopian novel. “So the idea that you have to be protected from any kind of uncomfortable emotion is one I absolutely do not subscribe to.”

And after being accused of racism and xenophobia last year when he repeated his observation that London “is not really an English city” anymore — an indirect reference to the influx of immigrants — Cleese hit right back: “I think it’s legitimate to prefer one culture to another. For example, I prefer cultures that do not tolerate female genital mutilation. Will this will be considered racist by all those who hover, eagerly hoping that someone will offend them — on someone else’s behalf, naturally.” 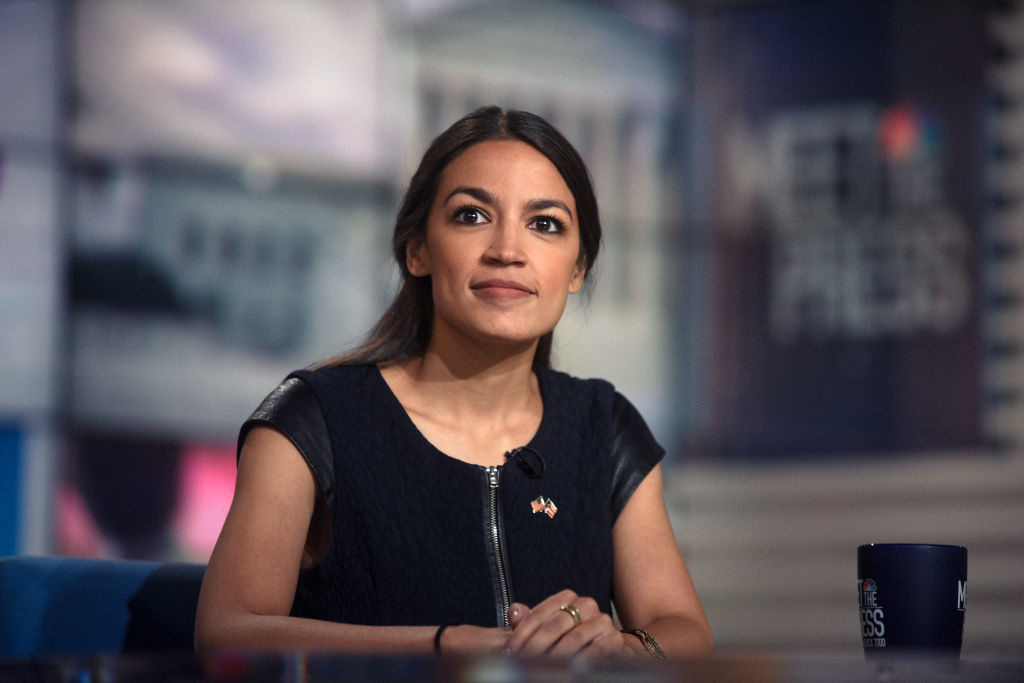 In a Friday morning tweet, freshman Democratic Rep. Alexandria Ocasio-Cortez (N.Y.) wrote that any future relief legislation should be drafted with a view toward providing reparations for minority communities because, she said, the disease has disproportionately affected those communities.

It is, by and large, true that wealthy people tend to live longer and have better health outcomes, as we have repeatedly emphasized here at TheBlaze as a reason that it is vitally important to get the economy moving again — not so that people can have more money, but so they can live longer.

And it is also true that the economic downturn is at least somewhat disproportionately affecting certain minority communities. According to the Bureau of Labor and Statistics, the overall American workforce is 12.3% “Black or African American” and 17.6% “Hispanic or Latino.” Meanwhile, the leisure and hospitality industry, which has been hit the hardest by the coronavirus shutdown by far, is 13.1% black and 27.0% Hispanic.

The question remains, however, whether the proper response to the economic damage caused by coronavirus should be directed to people specifically because of their skin color, or because they work in industries that have been devastated by the shutdown. Presumably, workers of all colors in the leisure and hospitality industries will be devastated by the loss of several weeks’ pay.

Still, as compared with some of her other coronavirus pronouncements, this one is actually not as bad as it could have been. As BlazeTV host Stu Burguiere has pointed out: almost literally every single word that has come out of her mouth about this crisis has been wrong. 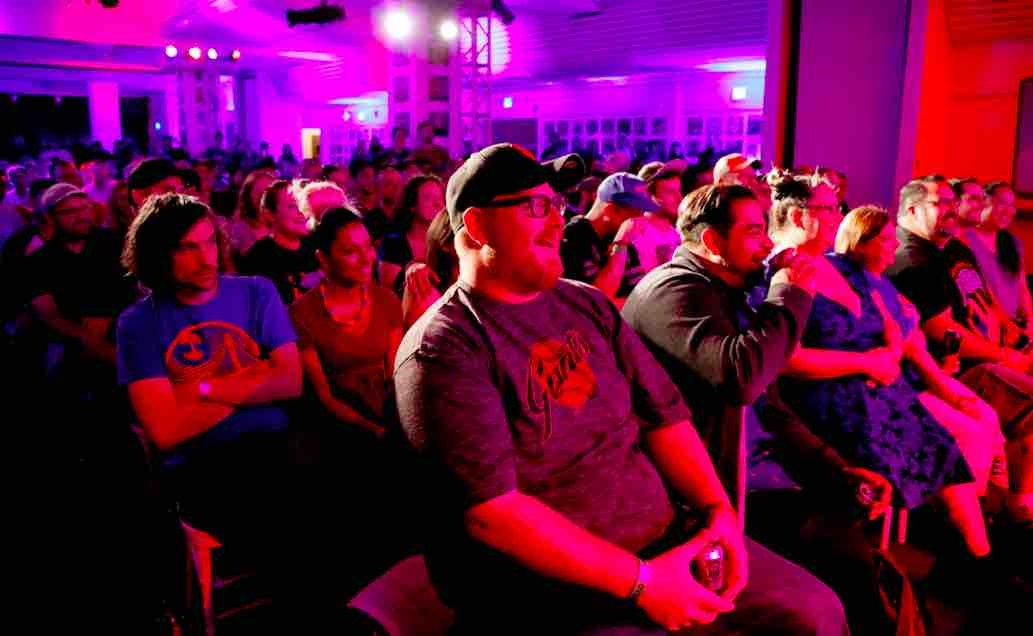 Political correctness, woke culture, safe spaces, and trigger warnings on college campuses have made these once-favored destinations of many comedians little more than free speech and free expression kill zones favored by the left.

Therefore it should come as no surprise that a vast majority of Democratic college students — a whopping 76% — said that offensive jokes can constitute hate speech, according to the results of a recent College Pulse survey of 2,000 undergraduates.

Among the survey’s findings:

More from the results: 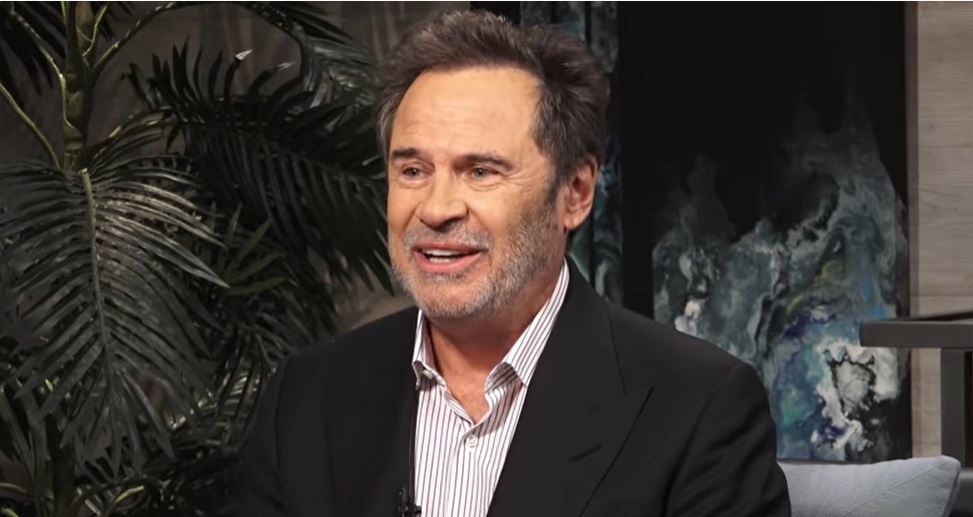 In this episode of “The Rubin Report,” Dave Rubin talked to actor, comedian, and talk show host Dennis Miller about the current state of comedy in today’s politically correct culture.

Dennis revealed what former Fox News host Bill O’Reilly was really like behind the scenes and what it was like to do the “Miller Time” segments on “The O’Reilly Factor.” He discussed why he thinks the dynamic between them worked and the very intentional reason he called him “Billy.”

Dennis also offered his thoughts on cancel culture and the damage that a fear of telling jokes is doing to comedy. He also describes why he self censors because he doesn’t think it’s worth the hassle.

Watch the video below to catch more of the conversation:

Looking for smart and honest conversations about current events, political news and the culture war? On “The Rubin Report,” comedian Dave Rubin engages the ideas of some of society’s most interesting thought leaders, authors, and politicians. Subscribe to BlazeTV — the largest multi-platform network of voices who love America, defend the Constitution and live the American dream. 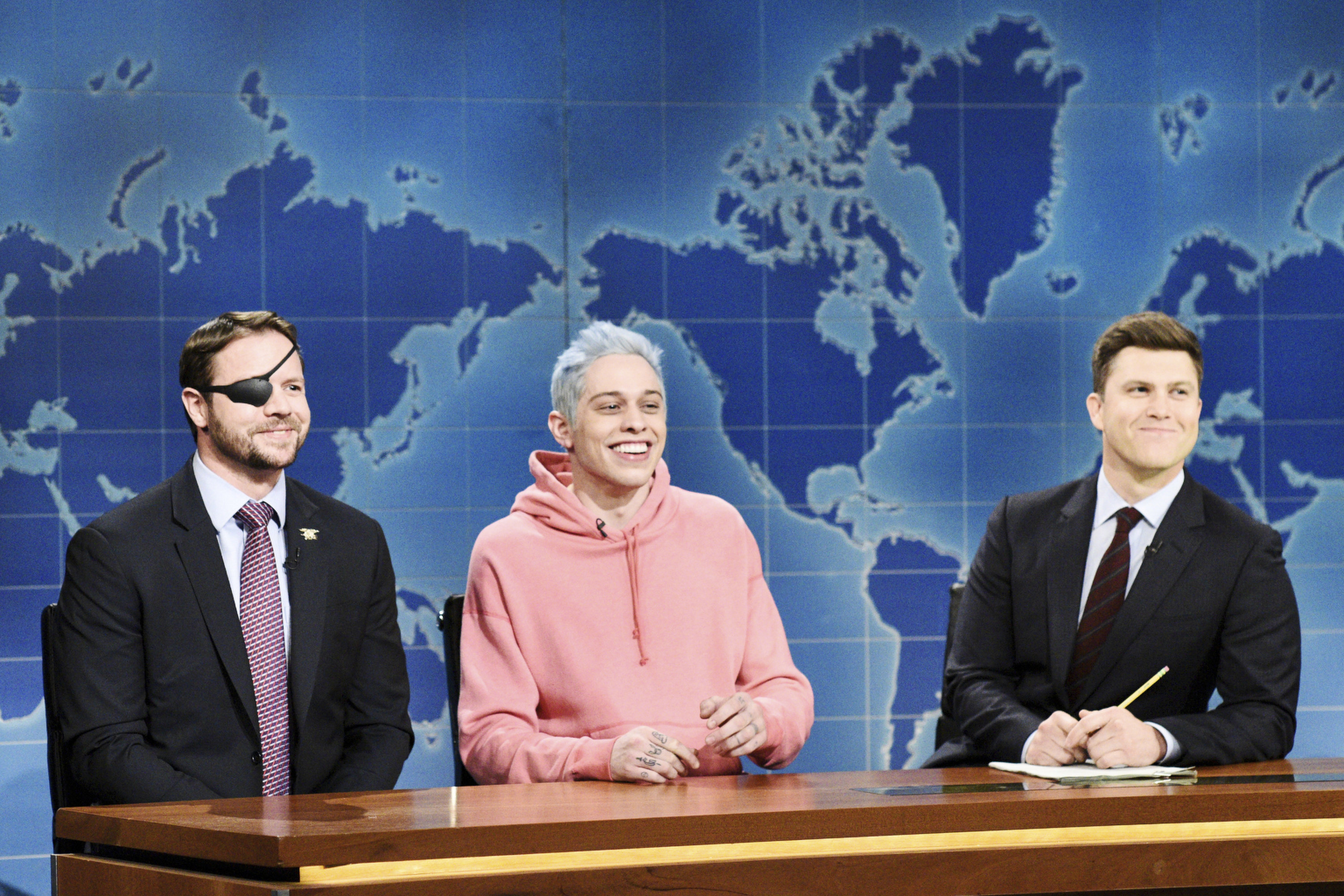 Davidson issued an apology to Crenshaw after making fun of the veteran’s eye patch during a 2018 segment on the long-running comedy sketch show, and the two later appeared on the show together in an apparent show of camaraderie.

The camaraderie was apparently false, though, on Davidson’s behalf because he recently admitted that he only issued an apology to Crenshaw because his hand was forced.

“Listen,” Crenshaw said during a Friday “Fox & Friends” appearance. “I can’t get out of Pete Davidson’s head. He’s been — he’s been thinking about me a lot for the past year as he builds this comedy routine apparently. I’m not so sure his jokes always land, but it is what it is.”

He continued, “It’s like our comedic careers are joined at the hip because he can’t stop thinking about me. It’s a little sad. We had a really good moment at that time in 2018. America liked it. The left and the right liked it. So, we don’t really want to ruin that.”

During Davidson’s new stand-up special, “Alive from New York,” Davidson revealed that he was forced to make the apology.

“So I made fun of this guy with an eyepatch and then, like, I kind of got forced to apologize,” Davidson said. “My roommate thought I should apologize so that I didn’t get shot in the face.”

Davidson continued, “People were like, ‘You hate America!’ And I’m like, ‘No, I just didn’t want to be incorrect about how he lost his f***ing eye. Is that a crime?!'”

He later added, “The only thing I did do, which I am guilty of — and I apologize for — is I did make that guy famous and a household name for no reason, right? I did what, like, Ariana Grande did for me, right? I sucked his d**k at ‘SNL.'”

You can read more on the background here.