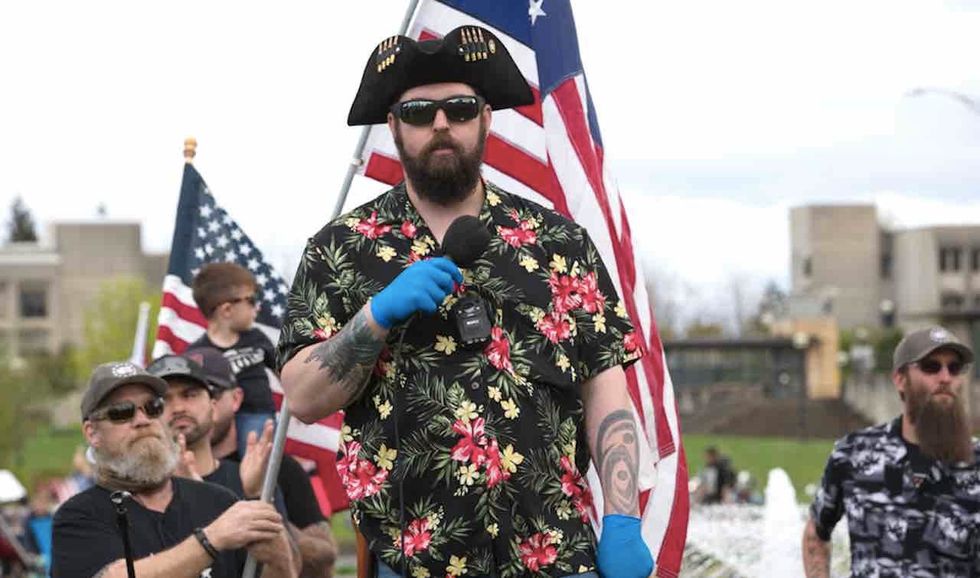 Len Foxwell — chief of staff for Maryland Comptroller Peter Franchot — last Monday on Facebook shared a link to an article about a group called “The Patriot Movement,” which called on people to defy coronavirus-related stay-at-home orders,
WJZ-TV reported.

The station said Foxwell wrote the following on his post, which has since been taken down:

Let’s lure them into a big, big warehouse (we’ll call it something real classy to suit their refined sensibilities, like “America MAGA Platinum Palace”) with the promise of all the unfiltered Camels they can smoke, all the Salisbury steak and banana moonpies they can eat, washed down by all the Old Crow and Icehouse they can drink.

Plus, autographs from Scott Baio and pics with Tawny Kitean [sic], posing all sexy and everything on a sportscar, just like in that old Whitesnake video! Get them in, bar the door, and then let Darwin work his magic.

Maryland Republican Party Chairman Dirk Haire got wind of Foxwell’s post and called on Franchot to fire his chief of staff, WJZ reported.

“I hope you agree with me that Mr. Foxwell’s statements suggesting the genocide of President Trump’s supporters are extraordinarily inappropriate and representative of a base and destructive mindset,” Haire wrote, the station said. “A review of Mr. Foxwell’s Facebook page shows many similar posts by Mr. Foxwell.”

Haire also said Franchot — a Democrat — should keep his future in mind, the Baltimore Sun reported.

“As an announced candidate for governor of Maryland in 2022, I expect you to do the right thing and terminate Mr. Foxwell’s employment as your chief of staff,” Haire wrote to Franchot, the paper said. “If you do not, you can be certain that Mr. Foxwell’s views, and your refusal to repudiate such views, will be made aware to every voter in Maryland during the 2022 campaign by the Maryland Republican Party.”

‘My deep, searing distaste for the President’s politics’

Foxwell on Saturday responded that his comments were made “in a typical spirit of sarcasm and jest” and were not directed at Trump supporters but rather at the leaders and members of the group, WJZ said:

Again, this had nothing to do with rank-and-file Trump supporters — notwithstanding my deep, searing distaste for the President’s politics and his catastrophic mismanagement of this crisis. Nor, obviously, did I ever express hope that someone would die. Any suggestions to the contrary are simply, absolutely false. By now, it’s fairly obvious that, like so many other social media brush fires that revolve around this President, a handful of provocateurs twisted unrelated content to suit their narrative of victimization and government persecution.

Franchot on Saturday night wrote the following on Facebook about the controversy:

Over the past few hours, I’ve fielded a few angry messages and texts from people who are demanding that my Chief of Staff, Len Foxwell, resign or be fired. This, in response to satirical comments that he made on his personal social media feed about the Patriot Movement and their willingness to violate “Stay at Home” orders imposed by the Governor of Idaho.

It has never been my policy to comment on social media content posted by members of my staff, so long as it is done on their own time. I won’t start now. Suffice to say, however, that I remain 100 percent supportive of Len Foxwell and the exceptional work he continues to do for me and for the people of Maryland. He is an exceptional public servant, a dear family friend, and I look forward to his continued service as my Chief of Staff for years to come.

Enjoy your evening and the rest of this weekend. Stay safe, everyone!

How did folks react to the comptroller’s defense of his chief of staff?

Franchot’s Facebook post drew about 2,000 comments — and as you can imagine, more than a few were angry at his support for Foxwell:

Haire on Sunday responded to Franchot’s statement by emailing the following to party supporters, the Sun said: “The Maryland Republican Party will be ready to deploy significant amounts of advertising and communications dollars in the 2022 Governor’s race to make sure every Maryland voter is aware of Comptroller Franchot’s views.”