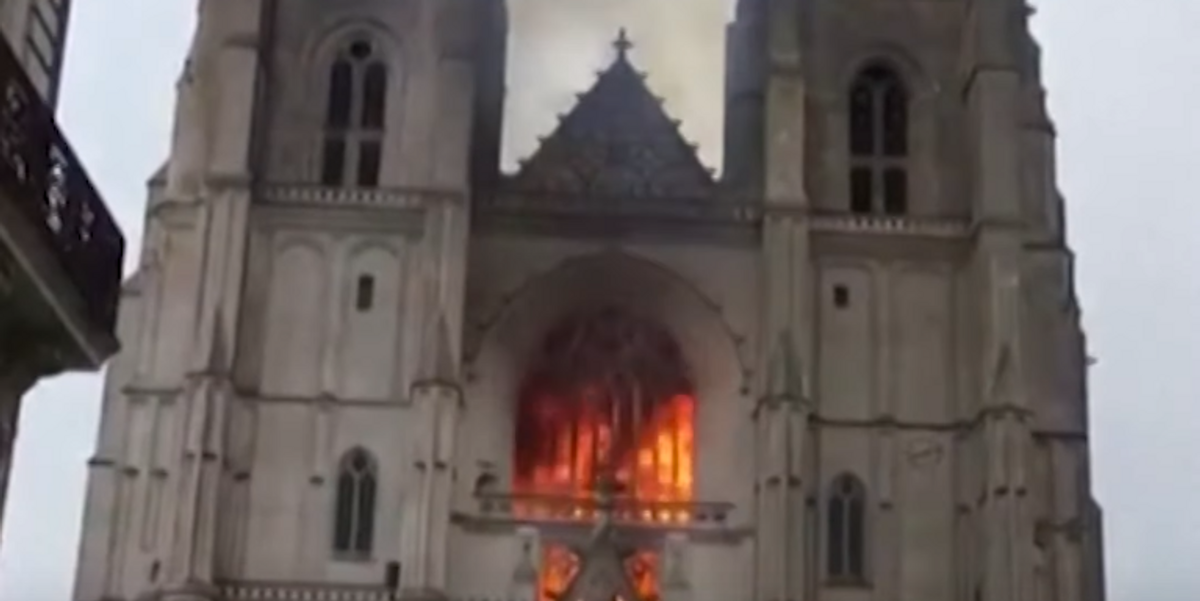 Three separate fires erupted in the Cathedral of St. Peter and St. Paul of Nantes, located in north-western France. French authorities have launched a criminal investigation into the blaze at the 15th-century cathedral in Nantes, the sixth-largest city in France.

The fire began in the early Saturday morning, and flames were visible from outside the cathedral. It took more than 100 firefighters several hours to control the blaze at the Gothic structure.

“The damage is concentrated on the organ, which appears to be completely destroyed,” Ferlay said. “The platform it is situated on is very unstable and risks collapsing.”

The grand organ was installed in the Nantes Cathedral in 1621. The organ originally had 27 keys, but over the centuries it was upgraded to 74 keys.

A fire in the 15-century cathedral in the French city of Nantes blew out stained-glass windows and destroyed the gr… https://t.co/3mLZIS9wy7

“When we arrive at a place where a fire has taken place, when you see three separate fire outbreaks, it’s a question of common sense, you open an investigation,” Nantes prosecutor Pierre Sennes said.

Ferlay pointed out that “the scenario is not comparable to Notre Dame” because the roof has not been affected. The Notre Dame cathedral in Paris also suffered a devastating fire 15 months ago.

French President Emmanuel Macron tweeted, “After Notre-Dame, the St. Peter and St. Paul Cathedral is in flames. Support to the firemen who are taking all the risks to save the Gothic jewel.”

Construction of the Nantes Cathedral began in 1434 and was officially completed in 1891. The Roman Catholic church survived the French Revolution and World War II, but was damaged by Allied bombing in 1944.

There was another fire at the Cathedral of St. Peter and St. Paul of Nantes in 1972, where the roof was mostly destroyed. The roof was rebuilt 13 years later with a concrete structure replacing the wooden roof.

“The fire of 1972 is in our minds, but at this stage the situation is not comparable,” Nantes Mayor Johanna Rolland said.


Fire breaks out at Nantes cathedral in western France

In 2015, a massive fire broke out at the 19th Century basilica of Saint-Donatien in Nantes. The fire was said to have started by roofers who were renovating the church.

Earlier this week, a Florida man crashed his van into a church and then set the building on fire with parishioners inside. Steven Shields, 24, was arrested by Marion County Sheriff’s Office deputies for the church attack of the Queen of Peace Catholic Sanctuary in Ocala.

The 249-year-old San Gabriel church outside of Los Angeles caught on fire at around 4 a.m. last Saturday. The cause of the blaze is under investigation. In late June, vandals toppled a statue of Junipero Serra, the founder of the missions of California. San Gabriel Fire Capt. Paul Negrete said the toppling of the Serra statue will be a factor in the investigation.