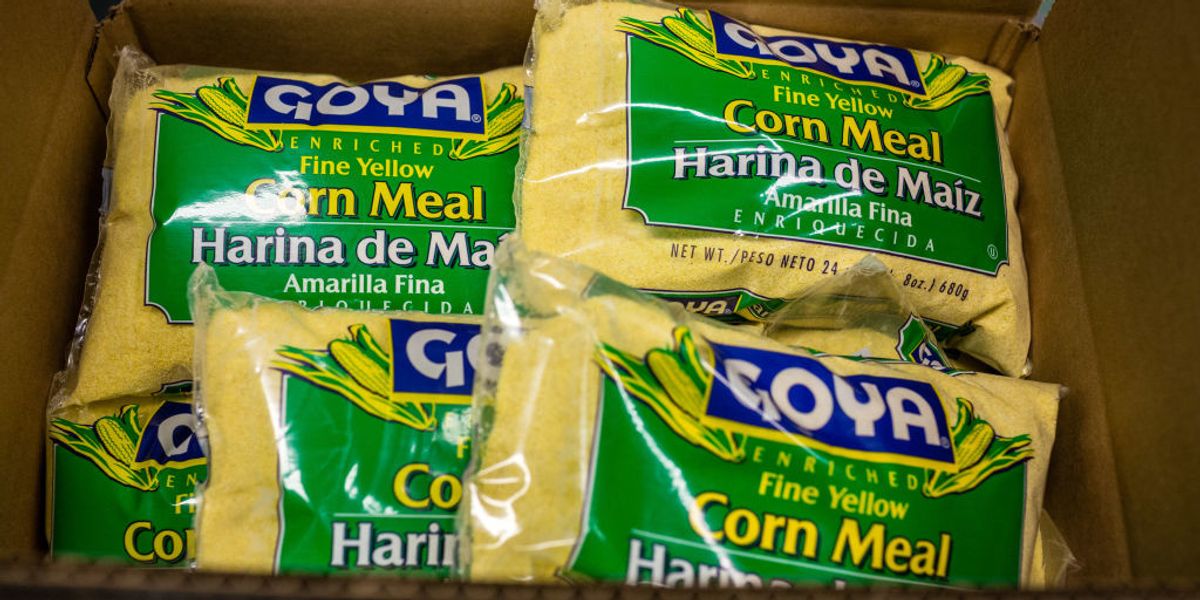 With one appearance at the White House and one sentence of praise towards President Donald Trump, Goya Foods co-owner and CEO Bob Unanue ignited a cultural rift over his hugely successful food company.

“We’re all truly blessed at the same time to have a leader like President Trump, who is a builder,” Unanue, who is of Latin descent, said. Unanue made the comment on Thursday at a White House roundtable event to promote the Hispanic Prosperity Initiative, an executive order signed by Trump designed to improve educational and economic opportunities for Hispanic-Americans.

Speaking positively of the president immediately triggered a boycott movement of Goya products by left-leaning individuals such as Alexandria Ocasio-Cortez, Joaquin Castro, and Chrissy Teigen.

Jon Cooper, a Democratic fundraiser and chairman of the Democratic Coalition Against Trump, tweeted a photo of him throwing away Goya products in the trash despite food banks around the country facing “unprecedented” demand. The hashtags #BoycottGoya and #Goyaway were trending on Twitter over the weekend.

However, there was a pushback to the boycotts as conservatives fiercely declared their support for Goya, the largest Hispanic-owned food company in the United States. The hashtag #BuyGoya was also a top trend on Twitter this weekend.

Sen. Ted Cruz wrote on Twitter: “Goya is a staple of Cuban food. My grandparents ate Goya black beans twice a day for nearly 90 years. And now the Left is trying to cancel Hispanic culture and silence free speech. #BuyGoya.”

Go out today and buy your Goya foods
https://t.co/O9undwBG8i

“It seems weird & callous to boycott a company who supplies food to the masses and employs 4,000 people during a pandemic,” said “The View” co-host Megan McCain. “No matter what your politics, who wants more people out of work? Almost every CEO, boss, & person I interact with and consume products from disagrees with me.”

Former Arkansas Gov. Mike Huckabee was stoked that the grocery store he went to was nearly sold out of Goya products.

Went to store today to buy some @Goya products. (I buy their beans anyway) They were pretty much sold out of all b… https://t.co/J6xSHQNLxs

Fox News host Laura Ingraham announced that she would buy “every can of Goya food” she could find this weekend. She implored her Twitter followers to “FIGHT THE CANCEL CULTURE!”

Fellow Fox News host Tammy Bruce admitted that she had never tried Goya foods before, but “it will now be the first brand I go to.”

Popular mixed martial arts fighter Jorge “Gamebred” Masvidal took time out of preparing for his UFC 251 bout against Kamaru Usman on Saturday night to voice his support of Goya.

“Actions of @GoyaFoods speak louder than the #woke mob,” Masvidal tweeted on Saturday. “My people don’t get influenced by those that don’t know. They’ve been helping our people when we needed it most.”

Actions of @GoyaFoods speak louder than the #woke mob. My people don’t get influenced by those that don’t know. The… https://t.co/VCbHn97nkh

Goya announced on Friday that they donated two million pounds of food to U.S. food banks that have been decimated by the economic ramifications of the COVID-19 pandemic.

Goya continues to work for the prosperity & education of our country! #GOYAGIVES two million pounds of food to foo… https://t.co/YB3dCcT5ep

In 2018, Goya donated a million pounds of food to Puerto Rico following the devastation by Hurricane Maria.

On Friday, Unanue doubled down on his support of Trump.

“I’m not apologizing for saying — and especially when you’re called by the president of the United States, you’re gonna say, ‘No, I’m sorry, I’m busy. No, thank you,'” Unanue said during an appearance of “Fox & Friends.” “I didn’t say that to the Obamas and I didn’t say that to President Trump.”

Unanue worked with former first lady Michelle Obama on her “My Plate” healthy eating initiative when Barack Obama was in office.

“You’re allowed to talk good or to praise one president, but you’re not allowed — when I was called to be part of this commission to aid in economic and educational prosperity and you make positive comment, all of the sudden that’s not acceptable,” Unanue explained.

On Friday, Trump inflamed the culture war over the massively popular company known for their canned beans, sofrito, adobo, and empanadas by tweeting out: “I LOVE @GoyaFoods!”

Cancel culture once again rears its ugly head, as AOC and co boycott Goya Foods for the crime of complimenting Pres… https://t.co/gEc0gtChS1