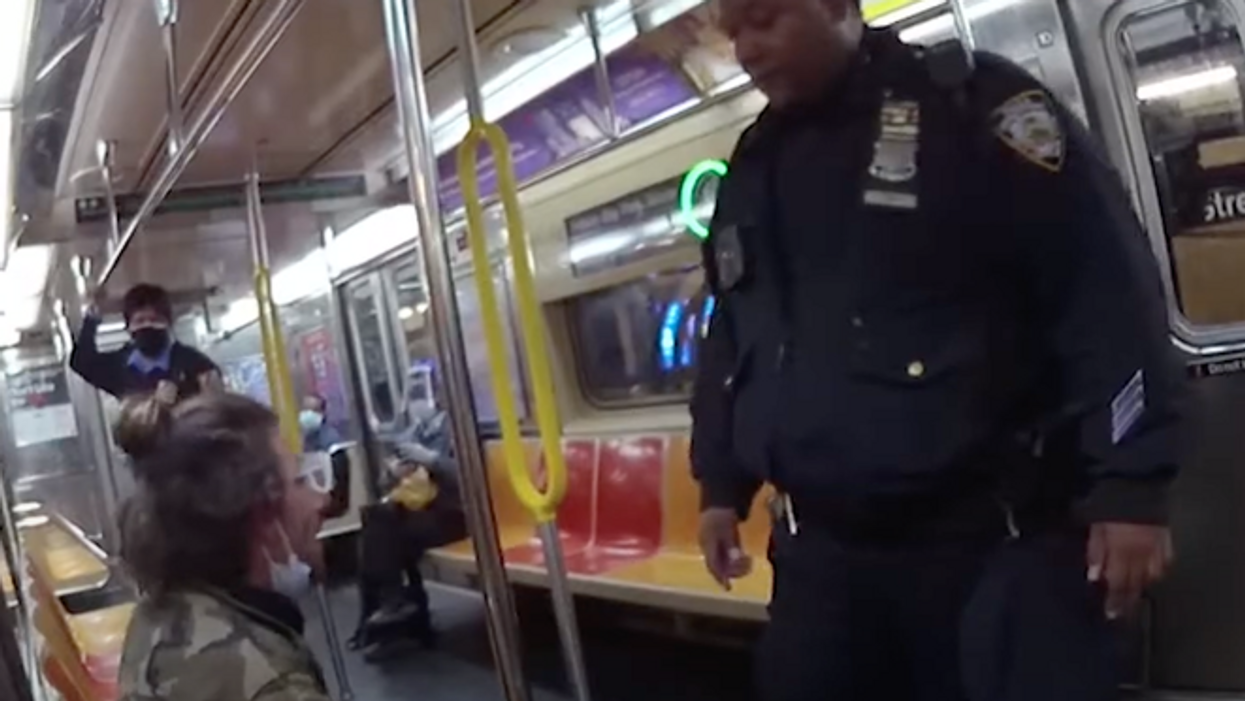 Body camera video shows an NYPD officer punching, choking, and macing a homeless man. The man was physically thrown out of a nearly empty New York City subway car for allegedly taking up more than one seat.

Bodycam footage of an aggressive arrest that was recorded in late May was made public on Wednesday by the Legal Aid Society. At approximately 12:30 a.m. on May 25, Joseph Troiano was told to exit a New York City subway car by NYPD officers. Troiano, 30, left the subway car and relocated to the neighboring one.

The NYPD cops followed Troiano into the other car of the No. 6 train heading to Brooklyn. “Step off or I gotta drag you off,” Officer Shimul Saha is heard telling Troiano.

According to a criminal complaint, the police approached Troiano because he was “occupying more than one seat.” The video, which was edited by the Legal Aid Society, shows that the subway car was nearly empty.

“You can’t arrest me for not wanting to get off of the train,” Troiano replies to the police officers.

NYPD Officer Adonis Long attempts to physically remove Troiano, and the man bats away the cop’s hand. Officer Long attempts to pull Troiano out of the seat, and he resists. Then Long punches Troiano twice in the face.

Troiano is physically thrown out of the subway car and falls to the ground on the subway platform. Troiano is ordered to sit on the floor by police. After he does not comply, Long is seen pepper-spraying Troiano in the face at close proximity.

Troiano is crying and screaming, “Stop!” Police officers attempt to handcuff Troiano, but he resists. While trying to pin Troiano to the ground, Officer Long is seen choking the man.

The officers finally handcuff Troiano. “I’m having a panic attack, please,” he tells the cops. The officers tell him to “relax.” EMTs arrive at the scene of the arrest and transport him to Mt. Sinai Hospital.

Troiano was charged with misdemeanor resisting arrest and second-degree assault, which is a felony punishable by up to seven years in prison.

Manhattan District Attorney Cyrus Vance originally pushed for the felony charge because the criminal complaint stated that Long “sustained swelling and substantial pain to the knuckles of his right hand and was transported to the hospital” after he was allegedly kicked by Troiano.

“He informs me that because of the swelling he is unable to open and close his hand without experiencing pain,” Officer Saha wrote in his police report.

The felony charge was dismissed this week after the case made headlines.

“Up until yesterday, the DA’s office fully intended to prosecute this case as a felony. It’s shameful that it takes a bad headline for Vance and his ADA’s to finally do right by our vulnerable clients,” said Edda Ness of the Legal Aid Society, who is representing Troiano. “We demand that DA Vance immediately dismiss all charges pending against Joseph.”

Troiano’s lawyer pointed out that Officer Long’s right hand may have been injured from punching the homeless man. “If you look at the video, and see the way he punches Joseph, then perhaps he got the injury that way,” Ness said.

The DA’s office said that it is investigating possible police misconduct.

“We are reviewing the footage and continuing to investigate all aspects of this interaction,” said Caitlyn Fowles, a spokesperson for Vance. “Our office has charged dozens of uniformed officers for official misconduct and violence since 2010, and will continue to do so in any case where such charges are supported by the facts and the law.”

Troiano’s arrest happened hours before the death of George Floyd and the subsequent worldwide protests against police brutality.