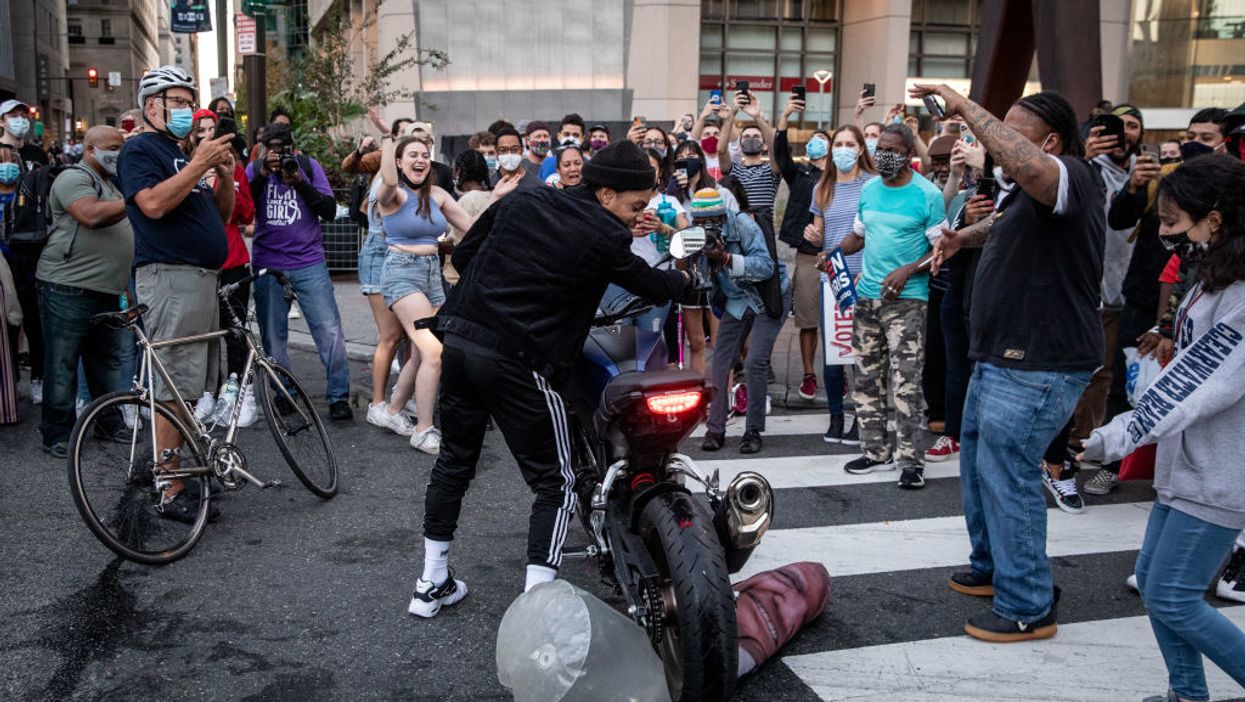 There were massive celebrations across the country as Biden supporters reveled after multiple news outlets declared Joe Biden as the victor in the 2020 presidential election. During some of the Biden rallies, the fervent crowd attacked effigies of President Donald Trump.

A huge horde of people gathered near the White House on Saturday, where it was so jam-packed that photojournalist Ford Fischer said, “social distancing isn’t really possible.”

“One Biden supporter is carrying around an effigy of Trump’s decapitated head on a pike wearing a pacifier and a pig-nose,” Fischer wrote on Twitter.

One Biden supporter is carrying around an effigy of President Trump’s decapitated head on a pike wearing a pacifier… https://t.co/93bsN8iuky

In Philadelphia, the fiery crowd took turns punching, kicking, and throwing around an inflatable doll with Trump’s face on it.

Before a man kicked the Trump doll, a woman is heard shrieking, “Kill that b*tch!” One man smashes a bicycle on the effigy of the president. The throngs of Biden supporters cheered every time the Trump doll was pummeled.

According to a Twitter video description, one man “murdered” the effigy of Trump with a motorcycle, and then people in the crowd stomped on what was left of the “rag doll.”

About a 1K people milled about #PhiladelphiaCityHall this afternoon, centered around a cone-shaped pillow-like item… https://t.co/jomtspSYHL

The rag doll was murdered with a motorcycle https://t.co/NG1PRaXz02

In Madison, Wisconsin, Biden supporters danced and sang “F*** Donald Trump.” One man is seen waving a “Back Lives Matter” flag in one hand while holding a bloody fake head of a beheaded Trump in the other hand. Also in Madison, a man brutally attacked another reveler at a Biden rally.

In Columbus, Ohio, Biden supporters were seen taking turns battering a mannequin dressed up as Trump. The effigy had Trump’s signature red tie, a “Make American Great Again” hat, and a “MAGA” flag. The crowd erupts in jubilation as the doll is clobbered.

Across the street, the crowd is knocking down a boxing dummy dressed as President Trump. #10TV https://t.co/Df5IQTV03q

“With the campaign over, it’s time to put the anger and the harsh rhetoric behind us and come together as a nation,” Biden said. “It’s time for America to unite. And to heal.