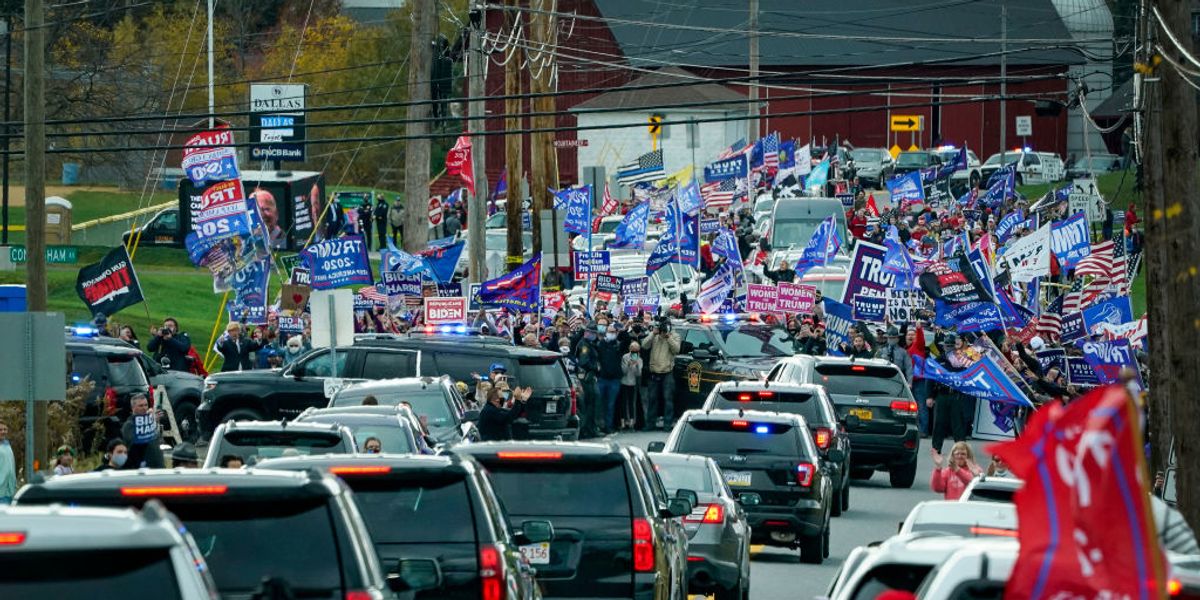 President Donald Trump and Joe Biden both held rallies on Saturday as both candidates make a final push before the Nov. 3 presidential election. Unfortunately for the Biden campaign, their rally turned into a Trump rally.

Biden held a drive-in rally in Bristol, Pennsylvania, north of Philadelphia. There were reportedly 170 cars at the drive-in rally for the Democratic presidential nominee.

Joe Biden leaving his only public event of the weekend, forced to drive through a Trump rally that drowned out and… https://t.co/A6tQWOMA3e

Reportedly, the Trump supporters were honking their horns and using megaphones, including one person who chanted, “Four more years!” Biden called the Pennsylvania Trump supporters “chumps” twice during Saturday’s rally.

“By the way, we don’t do things like those chumps out there with the microphone are doing, the Trump guys,” Biden said. “Look, we’ve got to come together.”

“I’ll work as hard for those who don’t support me as those who do, including those chumps at the microphone out there,” Biden said, then coughing into his hand. “That’s the job of a president, the duty to care for everyone. The duty to heal.”

A parade of Trump supporters showed up to Biden’s drive-in rally in PA and kept honking until he completely lost it https://t.co/SeAkfSHT3w

Slow Joe Biden says he is “sick and tired of smart guys.” https://t.co/yf92vqVD62

Meanwhile, Trump held a campaign rally in Lumberton, North Carolina. During his speech, the president lampooned Biden over his “tiny crowds” at his drive-in rallies.

“People in cars. I don’t get it. They’re in cars,” Trump said. “There were so few cars. I’ve never seen an audience like this.”

After the North Carolina rally, Trump is scheduled to make two more campaign stops on Saturday in Circleville, Ohio, and Waukesha, Wisconsin.