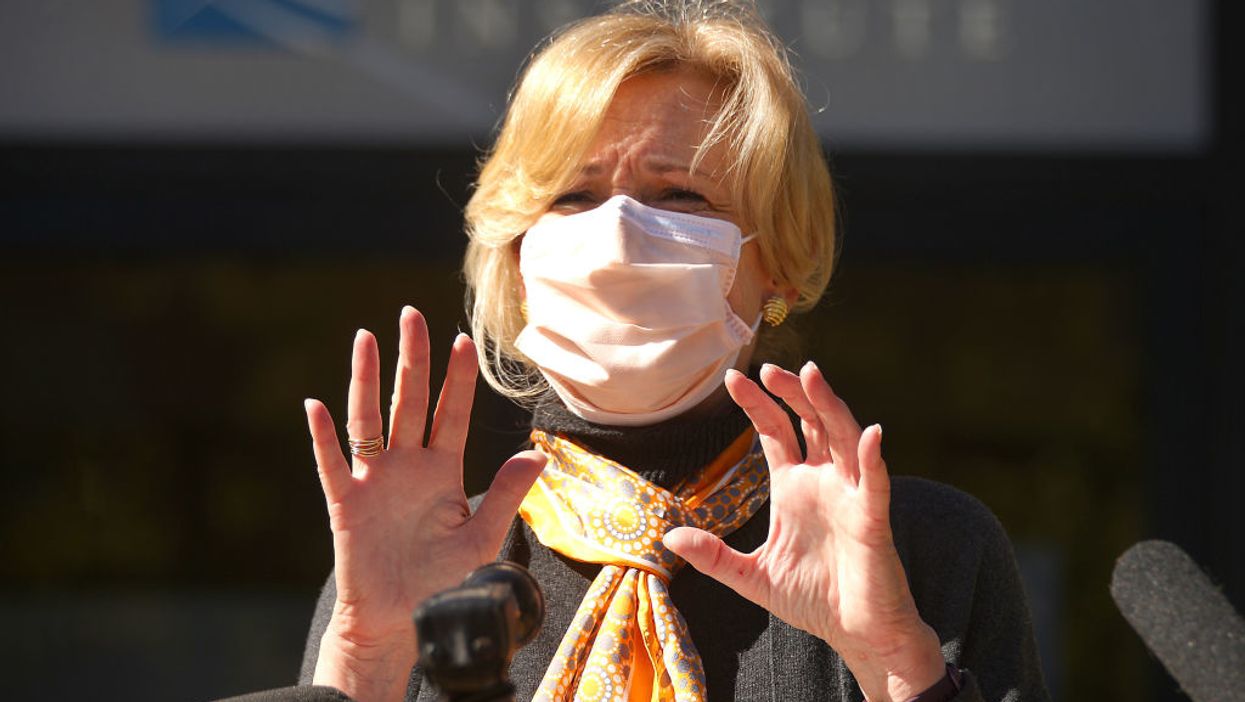 One thing is certain if Joe Biden wins the election: There will be intractable pressure put on states to impose lockdown policies on the citizenry. Joe Biden and Kamala Harris keep promising to pressure the states to maintain strict mask mandates indefinitely. But unfortunately, those policies are already being promoted under this administration by Dr. Deborah Birx. The vexing question of the day is how — and why — she continues to pressure governors to impose failed policies that the president himself has already rejected.

On Saturday, Birx visited local health officials in Rochester, Minnesota, to warn them of rising cases. Minnesota has a liberal governor who has promoted restrictions and mask-wearing as strongly as anywhere in the country, yet the fact is lost on Birx that her own policies have failed to stop the spread. She claimed that the early cold weather drove people indoors and is causing the virus to spread in recent weeks. Well, given that Minnesota has a mask mandate, why should that matter? Ooops, I forgot, masks actually don’t work.

“We can see the increase in cases coming and continuing unrelentingly unless together as a community of individuals we do things we know will stop the spread of this virus,” said Birx.

So, what exactly are the things “we know” will stop the spread? What has ever worked anywhere in the world to stop the natural progression of a respiratory virus that has taken over the flu for this year?

In comes Birx with the maniacal idea of mass testing for asymptomatic individuals. “What we’re asking people is to empower their communities by coming forward even when you don’t have symptoms to get tested,” she said.

Earlier this month, she said in Rhode Island that “asymptomatic, silent spread in the community” is driving the pandemic (at the 4:30 mark).

First, this is not a new idea. We are testing around 1 million people a day, nearly as many as we test for the flu in an entire flu season. It’s not stopping the spread. Isn’t it time to take ownership for the results?

Moreover, the president just said that we need to stop using “cases” that are overwhelmingly mild (and frequently asymptomatic) as pretext to shut down our lives. Why is she opposing the president’s position? There is no fourth branch of government headed by Birx.

The Fake News is talking about CASES, CASES, CASES. This includes many low risk people. Media is doing everything p… https://t.co/5EpJBtyl90

Birx, just like Biden, is trying to avoid using the word lockdown, but the idea that we are going to test every person in this country and have super-sensitive tests — rather than symptoms and hospitalizations — driving our policies is a recipe for shutting down every aspect of life. When asymptomatic individuals are included, this virus will likely target a large share of the 330 million people in the country. Remember, there is a lot of academic literature suggesting that a large chunk of the country gets the flu asymptomatically every year, possibly accounting for as many as 50% of those infected. There is nothing new about this virus. Were we to randomly test everyone for the flu every day and propose lockdowns in response, we would never survive as a civilization.

The reality is that despite all the hype and fear surrounding asymptomatic spread, every study that has actually examined transmission has failed to discover widespread asymptomatic transmission that could account for a meaningful percentage of community spread. A contact tracing study of 3,410 close contacts of 391 SARS-CoV-2 cases in a Chinese province near Wuhan during the peak months of the virus found that transmissibility seems to increase commensurately with the severity of symptoms presented by the infected individual. Of the 127 secondary infections that were traced to the original 3,410 cases, just eight were from individuals confirmed as asymptomatic.

The World Health Organization said in May that asymptomatic spread was “very rare.” Then, like any time a major scientific figure reveals the truth, the WHO suddenly recanted that position when the media raised a howl.

According to Birx, not only would combating coronavirus necessitate endless lockdowns, but we’d never be able to function even after COVID-19 is eradicated. Given that this virus, especially in recent months, has a fatality rate close to that of the flu, if this is the new threshold for civilization lockdown and government control, then we’d have to do the same for the flu. Taking her position to its logical conclusion, given the pervasiveness of asymptomatic flu, you could be killing elderly people every single year and not even realizing it. And unlike with COVID-19, kids are actually strong vectors for the spread of the flu. Schools would be closed all year and kids perpetually kept away from adults unless they test every day during flu season.

The perplexing question is why is Dr. Birx is still able to tour the country as a Trump administration official and propagate panic that directly conflicts with the espoused views of her boss.

The tragic reality is that focusing on universal lockdowns and testing of the healthy hasn’t helped save a single life, even as it has destroyed millions of lives from collateral damage. Nobody contextualized this insanity better than the left-leaning Daily Beast. While noting Italy’s strong second wave of cases, the outlet observed that “the country has done everything experts like Dr. Anthony Fauci have been advising.” These ideas include the following: “Face masks in public places have been compulsory for months, social distancing is strongly enforced, nightclubs have never reopened, and sporting arenas are at less than a third of capacity. Children who are back at school are regularly tested and strictly social-distanced, and yet, the second wave seems completely unstoppable.”

In other words, after destroying a generation’s mental and emotional health, they have nothing to show for it but a spreading virus. Yet shockingly, Dr. Birx said in August, “I wish that when we went into lockdown, we looked like Italy.” She extolled Italy’s totalitarian policies of ensuring that “people weren’t allowed out of their houses.”

Sadly, while our lockdown wasn’t as bad as Italy’s, it still needlessly prolonged the epidemic and killed a great many people.

174,432 dead with the Birx-Fauci-Redfield #COVID19 Task Force before Atlas even joined. What happened after he took… https://t.co/ibQUcxmqzJ

Indeed, the results of Fauci in this country are terrible. It’s enough that we have to endure his ego because of his past reputation, but do we really need to be ruled by this no-name attention seeker who sits on the board of Bill Gates’ Global Fund?

The president has been moving in a better direction ever since he brought on Dr. Scott Atlas. But if he wins a second term, he must speak consistently with one voice. Unless there is a policy shake-up, Birx will continue to promote Biden’s worldview even after he is defeated.