In an interview with Lior Gantz of the Wealth Research Group, Robert F. Kennedy Jr. discussed the major problems facing the United States today when it comes to health. This is a MUST WATCH interview before you line up for the COVID-19 vaccine or any other vaccine for that matter!

This is an interview you’ll want to watch, as Kennedy talks about vaccine safety and efficacy, as well as how Big Pharma has taken over the government to dictate health policy. Their only concern was that YouTube would censor it or ban them altogether, so an exclusive portion of it, deemed too controversial for YouTube, since it involves the elite cabal, can only be accessed HERE!

Now that Big Pharma is in control, “pharmaceutical drugs are now the third leading cause of death in the United States after heart disease and cancer”, says Kennedy.  That’s huge, but it’s all by design.  Those in power, simply don’t care about us, and nothing is about health, it’s about profit.

“Anderson Cooper is sponsored by Pfizer,” says Kennedy. “And Merck sponsors Lester Holt.” Some of the biggest propagandists have a vested interest in making sure the public gets vaccinated, whether it’s safe and effective or not. They also get paid to push pharmaceutical drugs on the population using propaganda.

Because of the rampant pushing of these drugs, “pharmaceutical drugs are now the third leading cause of death in our country after cancer and heart disease,” Kennedy says.  Those numbers dwarf the coronavirus deaths (which are heavily manipulated.) Medical journals have become propaganda for big pharma.

All of this has cost Americans dearly.  We are paying for the propaganda with our health. Parents are being pressured to vaccinate their children even though it’s common knowledge those vaccines are not safe nor are they effective enough to warrant the potential outcomes.  Once a kid gets sick from a vaccine, big pharma has a customer for life. It’s a truly disturbing cycle.

For one example of the hypocrisy, Kennedy says he asked some health officials “how can you be recommending women don’t eat fish during pregnancy, and yet you’re giveng them vaccines during pregnancy that contain hundreds of times the aluminum that fish contains.”

Kennedy also talks about how Dr. Anthony Fauci got so much power and has squashed scientific research while pushing other studies in order to move his agenda forward.  Fauci has billions of dollars of funding at this disposal and can force scientists to comply with his commands and even manipulate the outcome of studies.

WealthResearchGroup.com has a long history of confronting crucial topics head-on, most recent of which is their call for gold $2,184/ounce, as a response of the irresponsible money printing (counterfeiting operation), led by The Federal Reserve System.

Later in the interview, Kennedy discusses how vaccines are created with in-depth detail as to why they cannot be made safe for everyone and efficacy is always low. He also details how the CDC knows that vaccines have caused the autism epidemic, but we are being lied to in order to prop up big pharma.

If you have the time, this interview is eye-opening and could help give you some information you may not have been privy to before. Consider watching the whole thing. It’s truly mind-blowing how low some people will go to make sure we sacrifice our health and pay for it with our money they’ve already taxed.

Make sure you check out WealthResearchGroup.com’s MOST-RECENT bombshell report on Bill Gates’ involvement in the vaccine monopoly HERE!

ACCESS both the interview and the EXCLUSIVE CENSORED transcript HERE:
https://www.wealthresearchgroup.com/ban/ 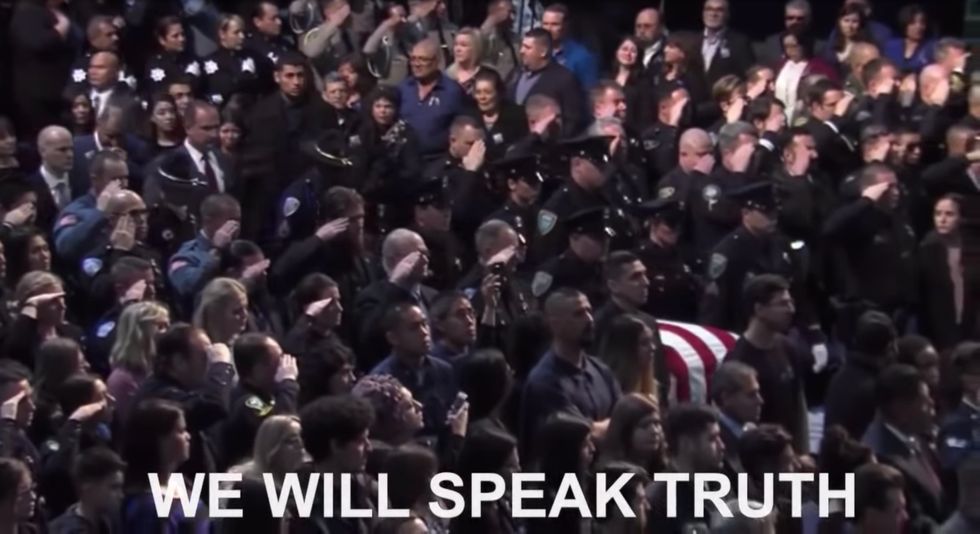 While many cities and organizations speak out against police in America and call for defunding law enforcement, Egard Watches is not one of them.

The luxury watch company has released a decidedly pro-police advertisement in light of the nationwide protests against police officers and police brutality.

The ad, which was released Friday on YouTube, shows footage of police officers performing extreme acts of heroism, including saving the life of a choking baby.

“This world is so imperfect. It’s full of pain and fear,” a narrator says. “Despite all the chaos, all the judgement, we know that so many of you are good.”

“We forget how human we are. How human we all are. Including you,” the video continues. “And that among all the sacrifice, mistakes can be made, and bad people do exist. We know that a world without you would not be better — but far, far worse. And for that, we thank you.”

“We know how much of your sacrifice goes unnoticed, and we know that the worst of you get the spotlight instead of the best,” the ad notes. “So many of you have given your lives to protect ours, to keep us safe. We will not stand by and let your work go unnoticed. We will speak truth.”

The ad ends with a sobering fact: “Over 60 million Americans have police interactions per year. Many of which result in lives being saved.”

Ilan Srulovicz, the company’s owner, told The Daily Wire that the concept for the ad was easy: speaking the truth about police.

“Initially, I was actually quite critical of the police,” he admitted. “The video of George Floyd really struck me. I very much want to see better training for police and accountability, but as time went on I realized the actions we are seeing today are so damaging — vilifying all police when so many are good and risk their lives.”

Srulovicz added that the atmosphere around policing has become “truly toxic.”

He also said that so many people are afraid to speak up in support of law enforcement, but he refuses to be one.

“Police and people within communities were attacked, some killed, and the media refuses to condemn it,” he said. “We have rhetoric that is so segregationist at this point and based entirely on people’s skin color, and it’s being celebrated. This is not the America I want to see.”

“Every company I see at the moment is pandering and virtue-signaling,” Srulovicz continued. “None of them actually care. None of them are willing to actually take a risk. It’s shocking to me that not a single company is willing to say something as simple as ‘This is going too far. Abolishing police is not the answer.'”

He concluded, “It’s time for us to stop living in fear and speak the truth. Yes, there are problems that have to be addressed, but what is happening right now isn’t right. I never imagined it getting this bad.”


Speak Truth – A message that needs to be heard