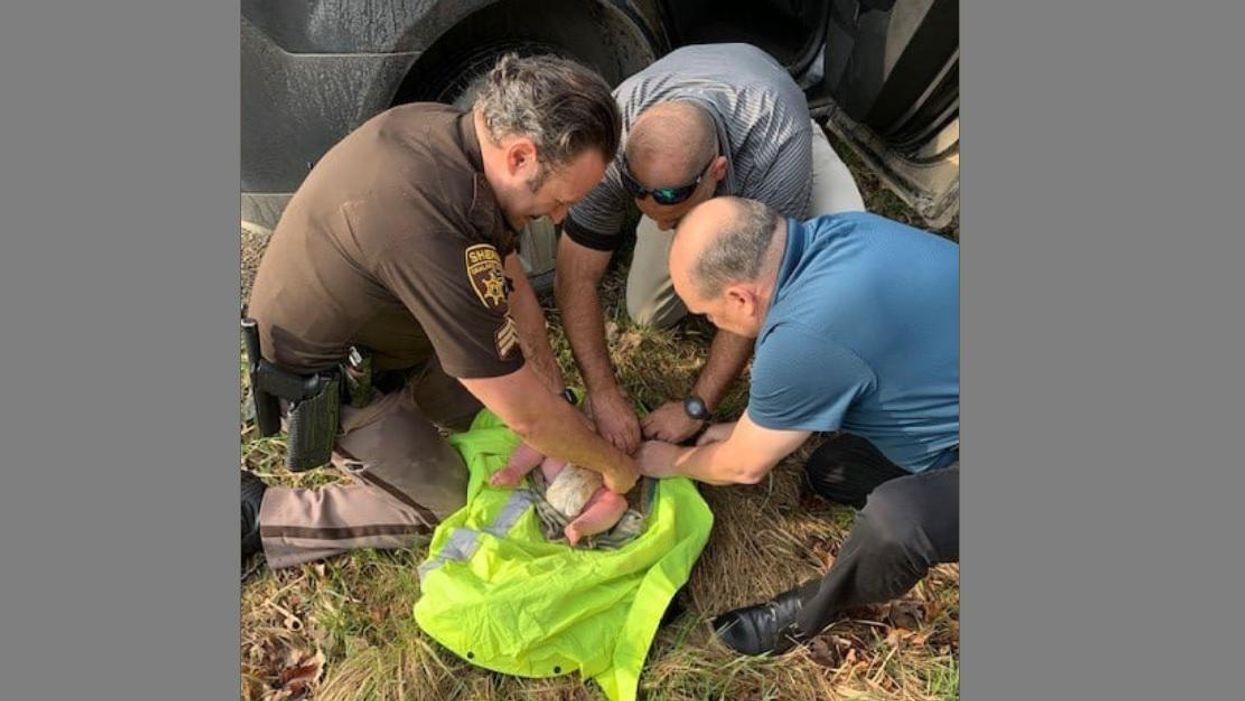 Sheriff’s deputies in Michigan’s Oakland County traced reports of a distraught woman to a 4-month-old baby boy abandoned on a wooded creek bank Wednesday, saving the infant they found facedown and suffering from hypothermia.

The Oakland County Sheriff’s Office wrote in a social media post that deputies responded to two 911 calls from neighbors in the area of Waldon and Joslyn roads “regarding a lone woman who was hiding in the bushing and ringing their doorbells.” They added that “the residents said the woman appeared distraught and said she believed someone was chasing her with guns.”

The woman was nowhere to be found by the time law enforcement arrived, but then another report came in that “a frantic woman was pounding on the locked doors” of a nearby middle school.

Authorities said they found the woman, 37, and spoke with her to try to calm her down. During the conversation, they found out she had an infant son. Noticing “burrs on her pants,” the deputies launched a search of the area.

“Thirty minutes after learning the infant was missing, deputies discovered him in the wooded area, cold and wet but breathing,” the news release stated, noting that the 4-month-old “was in a hypothermic state.”

The baby boy is now in good condition.

“Thankfully, deputies were able to determine a baby was missing, which triggered an immediate large response and search, and they were able locate the child,” Sheriff Michael Bouchard said in a statement, according to Fox News. “Their quick work avoided what could have been an unspeakable tragedy.”

The sheriff’s office added that “deputies believe the case may involve prescription drug abuse” and “a warrant is being sought for the mother’s arrest on suspected child abuse.

MLive reported that officials don’t know how long the baby was exposed to the elements, and that he is being kept overnight for observation at St. Joseph Mercy Hospital. The infant is now in the care of Child Protective Services. 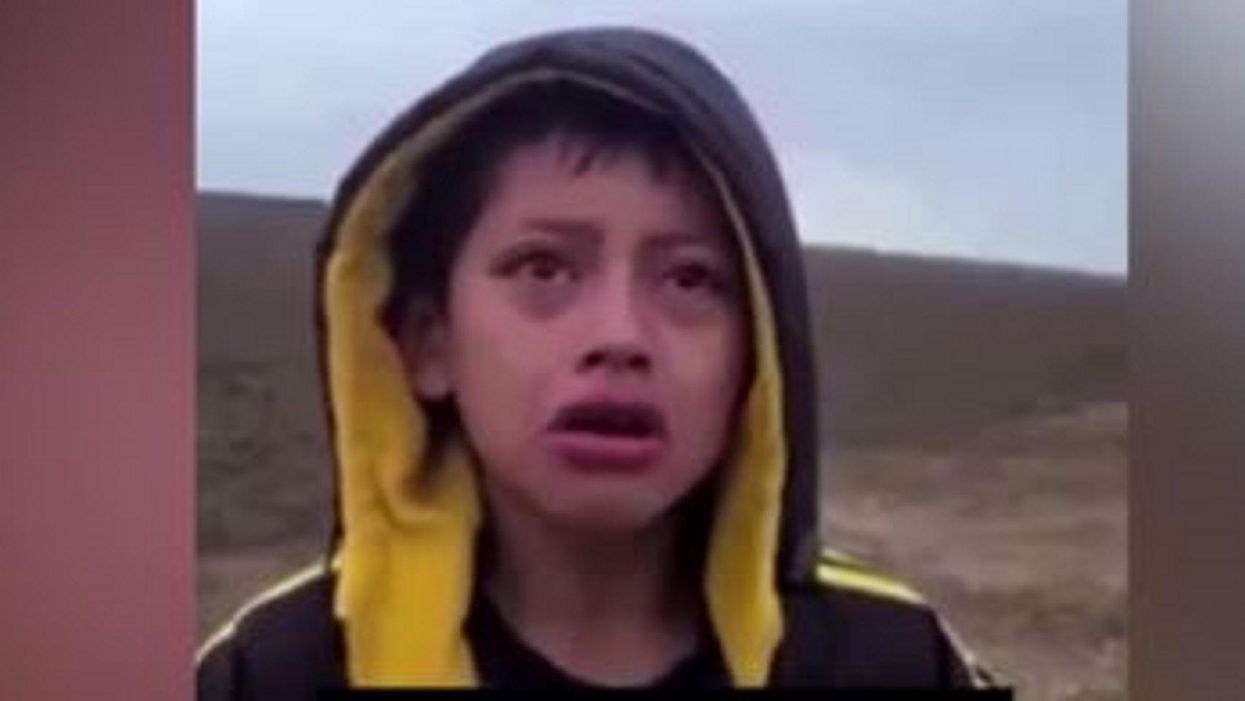 The U.S. Border Patrol has released a heartbreaking video taken by an agent who was approached by an abandoned 10-year-old migrant boy last week in a Texas desert near the U.S.-Mexico border.

The child is seen sobbing and asking for help, telling the off-duty agent who was on his way home, “They can rob me, kidnap me, I’m scared.”

The video is taken from the perspective of the agent who is seen driving down the road when he sees the boy walking toward him. The agent parks and exits his vehicle, and the boy asks him twice in Spanish, “Can you help me?”

“What happened?” the agent asks, according to translation provided by CNN.

“It’s that I was walking with a group and they left me behind, and I don’t know where they’re at,” the boy cries.

The agent then asks, “You don’t know where you’re at? They left you behind alone?”

And the boy replies, “Of course they left me.”

“They left you behind by yourself?” the agent asks again, “You’re not traveling with your mom or dad or anybody?”

The child, still sobbing, says, “Nobody. I was with a group to turn myself in with you, and they left me behind and I came to look for help.”

“They left you behind and told you to seek help?” the agent asked.

“No,” said the boy, “I came looking because I didn’t know where to go, and they can also kidnap me.”

According to Univision, the footage was first released on social media, and the border agent did take the unidentified child into his vehicle and to safety. The outlet reported that the boy “survived throughout the night in an area of the desert where rattlesnakes and wild animals abound.”

Rio Grande Valley Border Patrol Chief Brian Hastings also shared the video with CNN “to underscore the concern over the danger associated with the increase in unaccompanied children” crossing into the U.S.

According to Hastings, “migrant families are ‘self-separating’ in Mexico, sending children alone to cross into the United States after first having been expelled,” the outlet reported.

The abandoned boy was reportedly found April 1, just one day after the Border Patrol released footage of smugglers dropping 3-year-old and 5-year-old sisters from a 14-foot border wall and abandoning them. All three children were taken into U.S. Customs and Border Protection custody for care. 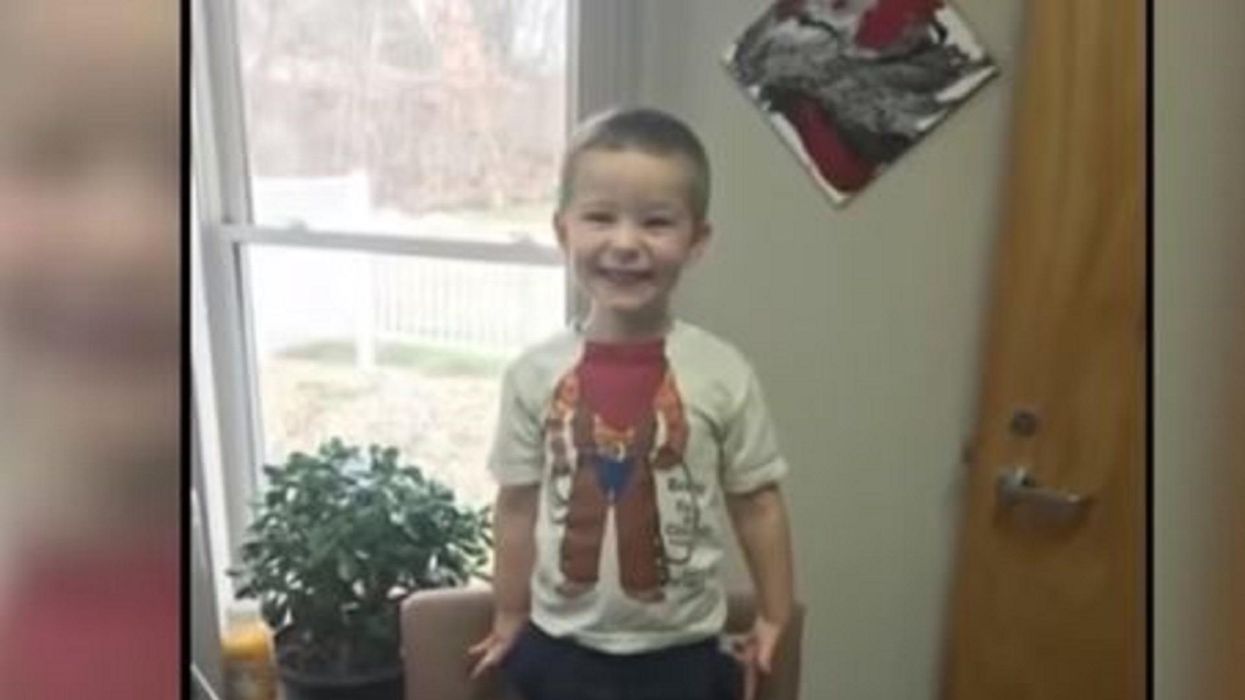 Two days before Christmas, a 3-year-old little boy and his dog were dropped off and abandoned at a cemetery in Hinckley, Ohio. A witness who called 911 said they saw the toddler — who wasn’t wearing shoes — chasing after the car apparently driven by whoever left the child and pup behind.

But once the word got out, calls, gifts, and offers of adoption poured in for the tyke, who the town’s police chief described as “a pretty happy little fella” even when they first took him into protective custody.

The witness, who discovered the child at Hope Memorial Gardens Cemetery, stayed with the boy to keep him safe until authorities arrived. The youngster was able to relay that his name is Tony, and he knew the first names of both his parents but not his last name.

The Hinckley Police Department responded and provided the boy with a change of clothes since his clothes were wet when he arrived, and bought him some lunch. Then they posted a picture of Tony on their Facebook page, asking for help identifying him and explaining how he was found.

The community rallied. People wanted to know if they could buy presents for Tony, and others offered to adopt him outright. During an interview with local station WEWS-TV, police Chief David Centner even offered to care for the boy himself, saying, “My wife and I have already told children’s services…we will welcome him into our home. We’ve got 14 grandkids and a big house and plenty of room and love for him.”

The department informed people that they could send gifts to Tony and provided his clothing size. A day later, they posted a picture showing the presents that had been brought, and Chief Centner wrote:

“From all of us at HPD we want to thank everyone for your kindness, thoughts, prayers and overwhelming love. Our lobby is full from the gifts that have been dropped off. I reached out to my friend Santa and tomorrow morning after he has finished his deliveries he is going to stop at HPD. We are going to load the sleigh and make on final stop to see our little friend.”

The Daily Mail reported that “a relative of the boy recognized the photo of him published in local media and contacted Tony’s father,” whom authorities have described as “very cooperative.” The father called police Wednesday, and indicated that Tony’s mother had custody of the child when he was abandoned, “NewsNation reported.

The father and officers also returned to where Tony was abandoned, and found the boy’s dog, who was still running around the cemetery.